After Sep 2015 in which USD 11 trillion dollars were wiped out of the global stock markets and the markets recovered strongly from then,  I sought the Lord whether the economic flood would be the next.  (I was given the vision of 911 attack in Sep 2001, the vision of the global recession in Sep 2008, and the global market crisis in Sep 2015 as recounted in my book, The Coming Economic Flood.)

I was told to read on the parable of the vineyard and it was only after three attempts in failing to recover the rent proceeds from the tenants that the landowner finally came and destroyed all these wicked tenants.   I am now wondering if this pandemic is the catalyst that will cause the economic flood.  Whether this coming flood is the final flood that causes the global economy to collapse,  it is definitely unprecedented in history.  (God is ever so patient and He may give some more time for some to come out of Babylon before the plagues of mourning, death and famine hit.  2 Chron 7:13-14.)

With many countries in lockdown for weeks now, if not months of partial lockdown,  it is clear that their economies will suffer recession.   But looking at the various problems that are already surfacing before the end of 2019,  the likelihood of it escalating to a depression is very probable.

Here is an article that believes the corporate debt reckoning is coming.

“Total U.S. non-financial corporate debt sits at just under $10 trillion, a record 47% of GDP. One in six U.S. companies is now a zombie, meaning their interest expenses exceed their earnings before interest and taxes. As of year-end 2019, the percentage of listed companies in the U.S. losing money over 12 months sat close to 40%. In the 12 months to November, non-financial S&P 500 cash balances had declined by 11%, the largest percentage decline since at least 1980…With economic uncertainty at an extreme and yields spiking, who is going to lend to zombies right now? Exacerbating that problem, we are now at the start of the debt-maturity wall we’ve warned about for years. Roughly $840 billion of bonds rated BBB or below in the U.S. are set to come due this year…

Corporate debt was the defining excess of the past decade’s bull run. Buybacks were funded by debt — over the past half decade, S&P 500 companies have issued $2.5 trillion in debt to afford $2.7 trillion in buybacks. Debt has subsidized the skyrocketing salaries of CEOs. Cheap debt has enabled private equity to take over and financialize Main Street. How severe the consequences will be obviously depends on how long COVID-19 keeps the world locked down. However, a reckoning with debt-fueled corporate greed is coming, regardless of Fed bond buying or government stimulus.”

Here is another article tracking the unemployment figures right now and comparing with the Great Depression in the 1930s.

Whether it is a great recession or a depression,  these are times of testing whether we are truly wise and faithful servants to other servants or sheep to the least of the brothers.  All praise and glory to our Lord. 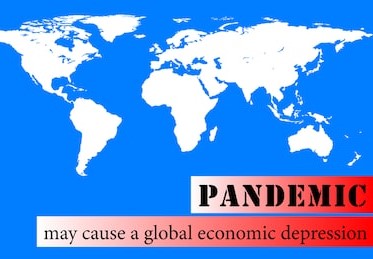